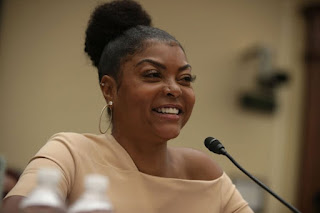 Award-winning actress Taraji P. Henson spoke candidly
about mental health issues affecting the youth in
the African American community at a congressional
hearing on Friday. “I’m here to appeal to you
because this is a national crisis,” she stated.
“I am here using my celebrity, using my voice, to
put a face to this, because I also suffer from
depression and anxiety,” she continued.
“If you’re a human living in today’s world,
I don’t know how you’re not suffering in any way.”

Watch the video clip below.


Back in April of this year, the Congressional Black Caucasus launched a
task force on mental health issues facing the black youth. They have since held
various hearings on the mental health stigma and growing number of suicides among
black youth. Henson who established The Boris Lawrence Henson Foundation,
attended Friday's hearing to discuss the foundation's work in addressing the issue.


Henson’s foundation is hosting a conference on the stigma of mental illness in the African American community in Washington starting Friday and going through the weekend. The proceeds will help fund therapy for African Americans who otherwise can’t afford it.

Keep checking back for more updates on all the work The Boris Lawrence Henson Foundation is doing in the community here on Blacktopia.org

PLEASE CHECK OUT THE MENTAL HEALTH RESOURCES BELOW