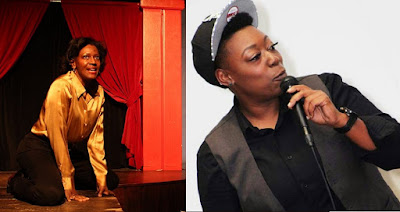 After releasing the clip of his Tracy Morgan impersonation that was performed on a recent edition of Blacktopia Presents Round Table Talk Radio (with hosts Barbara the Cuntry Cleaning Lady and Ms. Marie Jones), the show's producer Some Guy Named Jay also announced that he is currently working on creating an all audio sketch comedy show that will air on Spreaker.com

Well Some Guy Named Jay isn't wasting any time gathering the ensemble and crew for the show, as he recently enlisted the assistance of professional comediennes and Blacktopians, Sylvia Mann and KB Brown as writers, and both these very talented individuals are ready to pin soon to be classic material for popular podcast host.

"Jay and I have comedically sparred back and forth.

He's a funny guy.  I can't wait to see what we come up with

together.  This sketch comedy show will be fun."

Sylvia Mann currently performs sketch comedy as a member of the comedy troupe Democracy Burlesque at the legendary Second City in Chicago (the same place where stars such as Tina Fey, Bill Murray, Tim Meadows, Amy Poehler, and even the late Chris Farley got their start in comedy).

KEEP CHECKING BACK FOR MORE UPDATES.