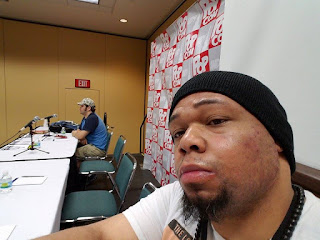 Blacktopia sits down with rapper, and comic book creator Slow Chemical for a one on one interview to discuss his new comic book series The Geneva Convention, his music, his history as an artist and more!  Read all about him.

Blacktopia:  Hello Slow Chemical, how are you?
Slow Chemical:  I'm great thanks for asking

Blacktopia:  How did you come up with the name Slow Chemical?
Slow Chemical:  I was going to the studio one day with another artist and at the time I was going by DWB I didn't have a rap name.  Well I was listening to a song by Finger Eleven a rock band called "Slow Chemical" well the artist I was with was complaining because it was a rock song.  Anyways we get to the studio and I'm in the booth doing my thing and it was a studio where you had a window sound proof but you can see the engineer. So I see him get up and tell the engineer to stop the track and then once the track is stopped he says to me. That's your name, "Slow Chemical " your style is so different it's a slow burn but once it hits you are messed up. So that's how I got the name.

Blacktopia:  How long have you been rapping and what inspired you to want to rap?
Slow Chemical:  I have been rapping for about 11 or 12 years now maybe longer I don't really remember.  I always wrote and eventually I just started rapping actually it's been longer but I don't remember when I started rhyming to be honest. What inspired me was just the competitive nature of hip hop the aggression and the challenge of making people respect your talking game.

Blacktopia: Who are some of your favorite rappers?
Slow Chemical:  LL Cool J, he is the reason I started rapping so yeah definitely more then 11 years haha . LL , Scarface, Soulja Slim, Ice Cube to name a few


Blacktopia: What other genres of music do you listen to?
Slow Chemical:  I listen to everything maybe not country but everything else I find interesting genre wise.

Blacktopia:   Who all have you worked with as an artist?
Slow Chemical:  Not many people I just started reaching out to people in the last couple of years but we have some names coming up you all might know. Other wise it is just my team my bro Jonathan ester gem star pro, Cold Conscious,  Steven Drake's. Like I said not many people but this new album will change that

Blacktopia:  How would you describe your overall sound as an artist?
Slow Chemical:  Yeah I never know how to answer that question to be honest so this will be pretty generic. I am just me I let other people talk and debate that out

Blacktopia:   What got you into comics?
Slow Chemical:  I have always been a fan of comics and what got me into writing them is I had this story I wanted to put together which eventually became my first book ever published  "dawn the mask" and I was talking to an advisor at school and she reached out to an artist and we just decided to go for it. So we did two volumes of it.

Blacktopia:   What are some of your favorite comics?
Slow Chemical:  My favorite story of all time is "X-Men: Days of Futures Past" but others are "Watchmen" and "The killing joke"

Blacktopia:   How would you describe your latest comic release The Geneva Convention?
Slow Chemical:  The Geneva convention is brutally honest and to the point. We have two issues out now and the third is coming but it's the most in your face book I have. 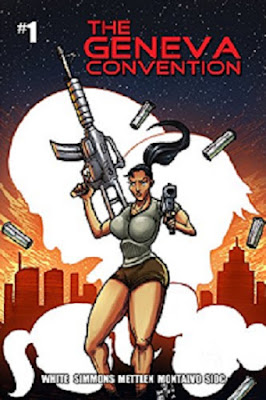 Blacktopia:  What are 3 reasons people should read "The Geneva Convention"?
Slow Chemical:  It's full of surprises for one. Yes it's a serious topic but a lot of people wanted to get involved in this project so we have Big Woo Radio with a guest spot as well as Bruce Prichard and Conrad Thompson the wrestling fans will know who they are making guest spots.  Two it's not a book full of filler some times people get caught in the "we have to do a standard issue" no you don't some books will be longer and some will be shorter but the story is what they are here for.
Three everyone always talks about it's the same thing that's out there go and support something new!


Check me out on ig @neversilverspoonfed  go to spotify or whatever you listen to music on and check out the music under slow chemical and leave comments. That's all be safe and blessed.

Get more updates on Slow Chemical and his official promo blog at http://www.SlowChemicalBlog.blogspot.com

Check out these links featuring SLOW CHEMICAL as well.

Posted by South East Hip Hop Magazine at 9:51 AM