Get To Know Jonny Bell One Of Philadelphia's Rising Stars! 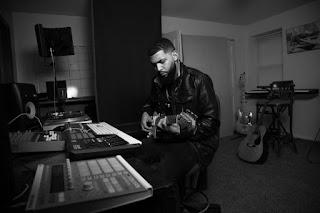 Jonathon Bell, known by his stage name "Jonny Bell" could be categorized as one of the most versatile recording artists in the music industry.  Born in 1988, Jonny spent his childhood years growing up in Exton, Pennsylvania, a suburb located 30 minutes outside the city of Philadelphia.  He discovered his love of music at a young age playing the electric guitar.  Legendary guitarists like Jimi Hendrix, Stevie Ray Vaughn, and Eric Clapton were all inspirations.
"Hip hop started for me in the back of a ford escort, rhyming to classic instrumentals and repeatedly listening to albums by Talib Kweli, Common, and Kanye West", Jonny says. It only took a couple years in college pursuing a civil engineering degree to realize his true destiny was to be the next influential voice in Hop-Hop culture. Eager to produce his own music, Jonny learned how to achieve a better sound by constructing a 2-room home studio in his parents basement after he dropped out of college to pursue his true passion.  After 3 years of balancing work and music in a samll town with only one small venue he knew it was time to reach a bigger audience.
In 2013, Jonny packed up all of his studio gear and moved into an apartment in South Philadelphia.  He produced, recorded, and engineered all of his recent work in the comfort of his own home-studio apartment.  Philadelphia served as new form of inspiration to feed off of.  As a full-time employee and part-time musician, Jonny experienced the highs and lows from standing ovations at open mic's and struggling to pay bills.  It was only a matter of time before all of those long hours, endless nights, and long work days would pay-off.
In 2016, Jonny released his single “Stuck in Camden” as a debut artist.  Jonny narrates a true story of being stuck in Camden, New Jersey one night after attempting to drive his friends home.  His production on this record emphasizes the early influences of true hip-hop culture and story-telling.  The music video, filmed and edited by Philadelphia based videographer Chop Mosley premiered on Russell Simmons All Def Digital Channel.  Throughout the year of 2017 Jonny has dropped more singles to his long awaited full-length project.
You can follow Jonny Bell’s music and progress by following him on Soundcloud, Twitter and Instagram, and be on the lookout for his full-legnth project "The Lady in My Dreams" set to release in early 2018.
Purchase his music here:http://itunes.apple.com/album/id1220663061?ls=1&app=itunes


Inspired by a true story, Jonny Bell's music video for his debut single "Stuck in Camden" takes you through a night when he was actually stuck in Camden, New Jersey after his car broke down. Song Written and produced by Jonny Bell. Video film production by Chop Mosley of Film Mob.
Posted by South East Hip Hop Magazine at 2:54 PM
Email ThisBlogThis!Share to TwitterShare to FacebookShare to Pinterest
Labels: Johnny Bell, Music