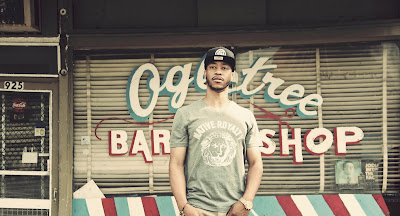 Check out our Blacktopia Artist Spotlight interview on Ron Beatty!  Also get connected with Ron Beatty on social media here at these links.

Blacktopia:  How is everything going with you Ron Beatty?

Blacktopia: How do you feel about Hip Hop today?
Ron Beatty: I feel good about it.  It's in a good place as content is really driving the music now.  It's like history is repeating itself with all the new cats really talking about something.  All that's missing is me.  Life's Grand is next up.

Blacktopia:  Who are some of the artists you grew up listening to?

Blacktopia:  Who do you play in your iPod right now?

Ron Beatty:  No ipod (he laughs), but when I do play music, I just play beats.  I'm in creative mode so I can't really allow myself to get indirectly influenced by other artists.  No genre at the moment.  At all.  Just beats.  In full creative mode man.

Blacktopia:  What type of subjects do you speak on in your music?

Ron Beatty:  I speak on things that everyone has in common.  All the emotional stuff without sounding soft or corny. The struggle.  More people want it than people who have it, and I want my music to reflect that majority. The constant pursuit.  That's what connects to the people.

Blacktopia: Do you have any type of songs that would be suitable for a more general audience?  If so, what?

Ron Beatty:  I got a joint called "Blessed" that's dropping in the midst of a trilogy called "Love Triangle".  That drops around my birthday on July 20th.  I feel that everybody of every walk of life has things that they are thankful for.  I just specifically detailed a lot of mine and hope to take people to a good, meaningful, and honest place with that joint.  It's kind of personal too.


Blacktopia:  As an artist do you do any type of humanitarian work or give back to the community?

Ron Beatty:  I feel bad because I really don't do any physical work like that, but I aim to put a lot of good messages out in my music.  Later, when I'm more in a position to actually help people how I see in my head, I will without a question.  Right now, I have a vision that I see and how I want to help others will come to the light soon.


Blacktopia:  What advice would you give to our youth?

Ron Beatty:  To take you time, and don't rush to get old. Embrace youth and all the good things that life has to offer. Fuck up.  Make mistakes. And learn from them.  Be a better person.  Help to save someone's life.  Be a leader.  Create your own path.

Blacktopia:  What projects do you have out right now?

Ron Beatty:  The Next Chapter, I Am Hip Hop Vol. 1, Master's of Ceremony with my old crew, The Empty Theater. All under my previous name, Chedda Chapp.  You can google a lot of my old joints man.  I say that because I probably left off some shit.  Have at it.


Blacktopia:  Thank you for this interview, do you have any last words or anything else you'd like to add?

Ron Beatty: Thank you guys for your time.  It's been real. Keep everybody plugged on Manifest Destiny too.  That's dropping real soon.  Believe it.